﻿
I’m not sure, but I think it has been about twenty years since I last fished Mammoth Creek. I got to know Mammoth when Jim Jones, my former boss and friend, introduced me to the area. The first fifteen years of my fishing pursuits were spent on Beaver Dam Creek, but Mammoth presented an entirely different experience. Beaver, a thin creek with lots of bushy vegetation along its banks, had plentiful numbers of small rainbow trout. Mammoth is a larger stream, perhaps two or three times the flow of Beaver, and it is known for its brown trout. Mammoth has several sections, but the one I fished most often was the meandering meadow section known as the Hatch Ranch Meadow. It was never as bountiful as Beaver, but it had the mystique of holding brown trout of worthy proportions.﻿﻿﻿﻿
﻿
﻿
﻿
I’m not sure what possessed me, perhaps it was the onset of cabin fever. Maybe it was the realization that trout fishing was all but over with the onset of winter. I had taken the whole Thanksgiving week off, so it could have been the desire to run away for a day. Whatever the reason, this Mammoth trip will go into my book as a trip I would like to have a “do over” on.
﻿

﻿
My trout truck computer said I was on the road seven hours and thirty-nine minutes during the round trip. I fished for about three and one-half hours, so that’s more than a two-to-one ratio of driving vs. fishing; I’d rather have a one-to-one ratio for day-trips. On the drive up I chose Utah’s Highway 89 rather than taking Interstate 15 to Cedar City and cutting over via Highway 14. Unfortunately I missed the Hurricane turn-off so I had to pay to drive through Zion National Park. I didn’t mind having to pay to see the sights of Zion, but I was very frustrated by all the slow moving sightseers along the way. That cost me an hour of travel time, at least. On top of that, once I crossed over to Highway 89 and reached the town of Hatch I discovered that its only gas station was closed, so I had to make an additional thirty mile round trip to Panguitch to gas up the truck. I didn’t get on the water until about 1:30pm Mountain Standard Time.
﻿

The meadow section is about 7,500 feet in elevation, and the truck's computer said the temperature was forty-three degrees at mid-day. Ice had formed on the banks along the slower-moving portions of the creek. Although with the mid-day temperature rising above forty the ice was breaking up, sending slabs adrift downstream. In the three and one-half hours I fished I only worked a quarter mile length of the creek. The creek was a little low, and very clear. I saw no fish scurry for cover, which was disappointing. (Sometimes when fishing small creeks and not getting any strikes I will walk up to the edge of the water to purposely frighten any fish just to prove they exist... which is a sign of quiet desperation. Fish scurrying for cover is a exceedingly observable event in small creeks.) I did see two rise forms in one short run, likely made by the same fish. Encouraged by the visual stimuli I worked that section carefully. I managed to get one strike but I lost the fly to the trout due to a weak blood knot in the tippet. I was unsuccessful getting the trout to take any flies again.
﻿
And so, it was another fruitless trip if measured by caught trout. But the scenery was spectacular, especially the drive through Zion. And the fishing was good even if it didn’t result in a trout or two. It had been a while since I had done any stream fishing and it felt good to work the stream and place my fly into positions that looked like the best trout holding areas. Alas, there were not many trout in this section of the creek and the one opportunity that arose failed me, or should I say I failed it. But still, it got me out of town and provided lots of reflective time while driving up and back. As I think it through, I’d like another opportunity to cast to that lone rising trout. I should have been more patient, I think. Maybe I felt rushed with the shortening daylight or frustrated by the excessively long drive to Mammoth. For whatever reason, I just wish I could do that trip over. Oh well, something to look forward to next spring.
﻿

Any day spent out of Clark County is a good day indeed. I have a friend in Cedar City that says Minersville and Enterprise lakes are underrated for big trout. I am still piecing together my beginner’s fly-fishing list. The Cabela’s free shipping offer is very tempting.
I am afraid that I will never be a purest. I just bought a Tenkara Japanese telescoping fly rod. Just because I refuse to give up the idea of back packing. I will use my Cabela’s rod for tube fishing.

Patience my friend, in a few years you will qualify for the “Golden Age Passport” and in a few more the reduced price Nevada Fishing and Hunting License.

Good health to you

Right you are about getting out of this valley. And I’m looking forward to advantaging my age towards all sorts of discounts; I won’t be shy about that.

Interestingly, or not, I’ve never fished Enterprise or Minersville.

I do hear that Minersville holds some nice fish; regulations say you can only keep one fish and it has to be over 22 inches (http://wildlife.utah.gov/hotspots/detailed.php?id=1154783391). They stock it with rainbows, but there are a few nice brown trout there as well. I have driven past the reservoir following the Beaver River west towards the Great Basin National Park. The Beaver River below the reservoir is also a nice wild brown trout fishery (http://wildlife.utah.gov/hotspots/detailed.php?id=1162841144).

My brother Neal fished Enterprise a few times (http://wildlife.utah.gov/hotspots/detailed.php?id=1154783518). It’s reasonably close to Las Vegas. I’ve talked to a few others who fished it within the last couple years and they had mixed results.

Don’t worry about being a “purest,” just get out and enjoy yourself. Whatever you do, do it with the intent and conviction of relishing in the joy of the task at hand. Just don’t kill too many fish (smile).

I would like to try fishing Mammoth Creek. Do you know if a 2WD vehicle can make the trek (when there is no snow or mud)? Also, you mention the "Hatch Ranch meadow" area and that Mammoth is mostly private, but is it marked so or would you just look for the "meadow"?

Yes, you can easily access Mammoth Creek in a 2WD vehicle. The graded roads are very good, except in the snow. The Hatch Meadow area is about 7,500 feet in elevation, so it will start to get snow that sticks in December (probably has snow now, but not likely to stick on the gravel). There are many folks that live in that area year round, so the gravel roads are well traveled. However, coming over from I-15 through Cedar City could be tricky as Highway 14 gets over 9,000 feet and will close in the winter, but Mammoth is still accessible from Highway 89 from Hatch, UT. Also, note I have links on this blog to the Utah Dept. of Wildlife. If you explore those you’ll find some answers. Try copying this address into you browser: http://wildlife.utah.gov/hotspots/detailed.php?id=1163524119.

If you have Google Earth (a free Google download and a must have for outdoorsmen and explorers) your will find Hatch Meadow at 37°37’02”N and 112°34’32”W (southwest of Hatch, UT). Coming off Highway 14 is a paved road just below Duck Creek. That paved road takes you to Panguitch Lake. Along the way it actually crosses Mammoth Creek. Before you reach that bridge, which is surrounded by private cabins, there is a gravel forest service road that takes you to Hatch, UT. That is the gravel road you are looking for. While there is no signage marking the area, you’ll recognize the Hatch Meadow area immediately, but for reference it is where the gravel road crosses Mammoth Creek via a bridge... trust me, you’ll notice the meadow upstream from that point. Following Mammoth downstream closer to its confluence with the Sevier River is where parts of Mammoth Creek flow through private cabin areas. The Hatch Meadow sections and a few miles upstream and downstream are readily accessible. My advice is to get there before Thanksgiving as it will start to develop ice around the edges.

FisherDad,
I enjoy reading your posts however when it comes to the Mammoth Creek, the areas you are describing are Private Property, No Tresspassing areas. The entire Hatch meadow as well as the stream below the bridge is a No Trespassing area. Hopefully you can append your posts that this area is closed to tresspassing.
Respectfully,
Wish2Fish

You are correct that I’ve not posted anything new on Mammoth Creek, as well as Utah enacted new laws regarding passage on rivers and streams that cross private property. My friend Chan (see above comments) and I had previously discussed the Utah restrictions and we were hopeful that Utah might amend their law to allow passage on foot if the angler stayed within the ordinary the high-water mark as allowed under the Montana Stream Access Law. Unfortunately, that never came to pass.

The good news is that the better brown trout fishery is the lower section of the creek, closer to its confluence with the Sevier River near the town of Hatch. It is also fishable above the meadow area in what I believe is known as the Yellow Pine area.

For more immediate information about the public sections of Mammoth Creek I suggest you reach out to the Circle Valley Anglers shop in Circleville, UT (see the link to their blog site above under “Other Web Sites of Interest”).

All the best on your Mammoth adventures. 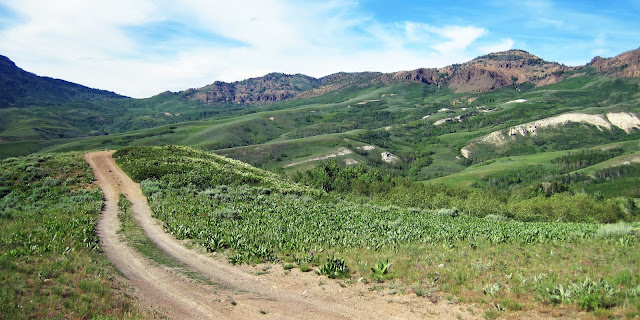