﻿
My brother Neal is responsible for cultivating my interest as an outdoorsman.  I suspect the seeds were planted as a boy growing up in Hooksett, New Hampshire, but someone needed to water them.  In my early teens he took me on my first fishing trip to Kingston Canyon south of Austin, Nevada. He gave me a cheep, ultra-light spinning rod, lures, and a canvas creel and set me loose after just a few minutes of instruction.  Neal was never long on patience, and he never really offered to teach me the art of fly fishing.  In college I bought several books on fly fishing, and after years of dreaming about it I finally taught myself.

After graduating from college in 1978, I badgered Neal into a Utah fishing trip.  I was still very much a beginner, and I wanted him to share his knowledge of both the sport and the places nearby where he plied that sport.  I think Neal finally decided that my graduation was as good an excuse as any, so we set off for Beaver, Utah with thoughts of fishing the high mountain lakes in Fish Lake National Forest.  Upon arriving in Beaver we unfortunately learned that the Utah season did not begin until June 1, so we could not fish. Neal suggested heading west on Highway 21 to Cave Lake near Ely, Nevada.  That fortuitous decision turned out to be brilliant.

In those early days, we killed everything we caught. Catch and release had not really been discussed much at that time. The objective was to come home with the ice chest as full as we could get it. Cave Lake filled that bill splendidly.
In 1978, Cave Lake was under-utilized.  Although just twenty minutes outside the town of Ely, it was not well known down south, or at least the southern population of potential fisherman was not what it is today.  Although they stocked the lake with rainbow trout, Neal was aware that there were holdover populations of brown trout that were reproducing in the feeder creek.  We must have timed our visit just right as the lake was well stocked.  Even as a novice who fished dry flies exclusively,  I caught many stocked rainbows.  However, the real excitement was catching the brown trout, or "brownies", on dry flies.  In one instance I recall standing on the boat dock watching this large (large to me at that time was anything over thirteen inches) brown sucking mayflies from the surface.  I was fishing with my newly constructed seven-and-one-half foot fly rod, a rod of my own creation.  I quickly cast a dry fly into the path of the cruising brown.  I watched as he leisurely approached, opened his pink mouth, and sucked in the fly.  What an awesome experience for a twenty-one year old novice fisherman.  That was an addicting event.  Neal also caught several good size brown trout, and one of the pictures we took with Neal’s creel, rod, and bib arranged around the trout was composed so well that I drew the picture in pen and ink in 1981.
﻿
I returned to Cave Lake for a solo visit in the fall of 1980, but only caught two browns.  I did get a strike from a brown on a dry fly, and that trout could have gone twenty inches and three pounds easily.  I thought I had set the hook, but as the brown leaped clear of the water it pulled out.  Disappointed, I retrieved my line and examined the hook.  I felt like an idiot when I discovered that the hook point was bent (probably from a sloppy back cast bouncing off a rock), and that it never set into the trout’s jaw, but rather had been pulled straight as I attempted to set the hook.  That was a difficult lesson to learn at age twenty-four.
﻿
My next visit was with Doug and Tom in 2000; a maiden voyage for my new Dodge Quad Cab.  We camped in Cave Lake, but visited Silver Creek near Great Basin National Park and Illipah Reservoir on the way to Eureka, Nevada, as well as a long jaunt up to the Ruby Marshes.  Although Cave Lake served more as a base camp on that trip, it became known as “Skunk Camp" due to a visit from a nocturnal skunk on the second night.  Tom had become ill in the middle of the night and vomited just a few feet from the tent, which is not adequate distance to safeguard the camp from pesky scavengers.  Sure enough, before we even re-entered the tent along came an ambling skunk which consumed Tom’s remnants right before our eyes.  Tom was a good sport about it, and it was interesting to watch the skunk; thank goodness he never left a calling card.

The most recent visit to Cave Lake was in 2003 with Brian and two of his buddies.  That was more of a camping trip than a real fishing trip, as all three had to be assisted constantly with tying knots and unraveling “bird nests”.  Still, it was a fun trip for the boys and included the obligatory Great Basin National Park side trip.  Splitting time between the three of them was fine, but it would have been better had I spent more time just with Brian.
﻿

Mark,
I enjoy you site and your stories. Keep it up. Although I am fishing less these days, I have become more a fisher of men. I have a weekly email that I send, and if you would like to be included send me your email address. 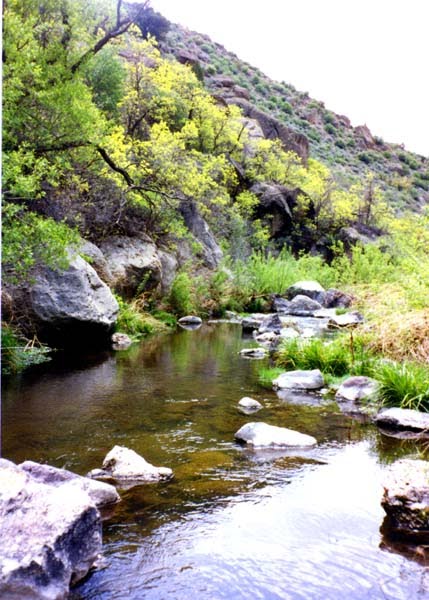